Player of the Match: Zap

Match Report: We were all really excited to get the season finally underway, especially Paul who went to bed the night before in his full kit, boots, pads and all

Before the match it was lovely to see so many parents present to see their sons play – Joe to watch Pom, Richard and Margaret to watch Mark and Tolly’s Dad, Charlie, to watch his favourite son he wished he’d had, Andy. Margaret had seen Pom as she was settling into her chair and was heard to say, with a tone of disappointment to Pom ‘oh, are you back playing for Blue Mountains?’

The game got underway in hot conditions. We got an early goal, Tolly, trying to get his Dad to notice he was playing, challenged a high ball with the keeper and as the keeper spilled his lollies, Ibra was on hand to knock the loose ball home

The goal settled the nerves, so much so that Pom and Chicken decided they would take a break and watch the rest of the game from the bench. A squad of 18, down to 12 in hot conditions 20 minutes in – awesome!

Hazo came close to equalising but fortunately we had the second best keeper in the division in goal today in Zap, diving full length to the top corner to brilliantly tip a great shot over

With the ref splitting each 1/2, into 2/3rd’s, drinks break and then a 1/3rd (huh?) it was hard to know exactly how long was left. Anyway, in the early part of the second half, Mark took the game away from Hazo with two signature goals, running passed a defender and sliding the ball home across the oncoming keeper

Late on, Thor was deployed in the centre of the back line. This clearly did not sit well with attack minded Thor, who burst forward upfield and was seen swinging his hand bag, rather than his hammer

After the game we headed to Knapsack to watch the Prems beat Iceman’s favourite team Emu Plains – Paul still in full kit to the end, hoping for maybe one more game before the weekend came to a close 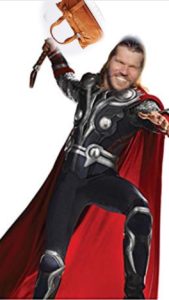