Player of the Match: Aidy

We’d had two tough close games with Jamo this season and wanted a solid finish to the season. The first 10 minutes were even with both teams creating a few half opportunities. The first goal came after 13 minutes – off a corner, the ball was cleared to the edge of the box and Harry Smith fizzed a low hard shot through the packed box and past the keeper – great technique to keep the ball down

The next came when the two Harry’s combined – Burns lifting the ball over the defence for Smith to volley over the oncoming keeper into the roof of the net for his second. One more before half time – Martin playing a delicious ball through the heart of the defence for Jake to get to ahead of the keeper and knock home

We changed things around at half time again to try and get more of the remaining goalless five off of the figurative nudie run. After letting Knobsy go in goal last week & being pleasantly surprised that he kept a clean sheet, I didn’t want to push my luck so needed to select someone else. Beaso was handed the gloves – the huge smile said it all – Jacob loves playing in goal. A forward line of Braydo and Aidy, with keeper Eli down the right – giving them all a chance to notch their first for the year

20 seconds into the second half, new sweeper Jake went walkabout & then played a super pass – to the opposition centre forward. Beaso did a good impression of a goal keeper except for the bit where you dive to make a save. I’m now thinking ‘two more conceded goals and we are going back to standard formation’!

Fortunately that wasn’t necessary as seven minutes later Braydo got his goal. Then Liam cracked another free kick home – we should start calling him Beckham as Liam has scored probably 6 goals from direct free kicks this year. Next it was Aidy on the scoresheet – this was now going well. Beaso however was losing his mind. First of all he received a back pass off one of our defenders but instead of simply taking a touch and passing it (like we train, every week!), no, Jacob decided to go on a goalie run. Beat one, beat two and then loses the ball! Mad scramble and we clear. Two minutes later we get a corner. I look away for a second, then look back to see two goalkeepers in the oppositions box – what the heck are you doing up there Jacob?!

Sam and Martin were given a run up front and both went close to getting their goal. Eli was upended in the box and Jamo’s keeper was in my opinion harshly sent off. Eli’s penalty was parried but only into the net

A terrific performance to finish the year

Photo – why are there two goalkeepers in the opposition penalty box? Beaso!!! 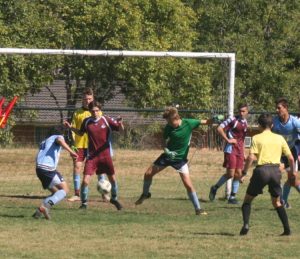