AdminPosted on 24 May 2021 Posted in Match Reports

Match Report: The boys all had a quiet Saturday night in before Sunday’s game….well, some might have done. With the Eurovision Song Contest on this weekend, the Glenmore Park Massive had been to a Eurovision fan party – there were some great costumes, see photo below (one of these is our regular sweeper – can you pick which one?). Beaso & Brayden had both got themselves new mullet hair cuts for the shindig – Beaso’s the local hair salon ‘Snips n Tips’ & Brayden at home by ‘Liam’s Luscious Locks’. Beaso’s new look helped him score on the weekend…

Football-wise there were some super goals scored – a couple of long-range ones from Damo, Eli coming out of goal for the second half setting up both Clay & Ethan for goals & bagging one for himself too.

Finn, who turns 18 later this week, was given an incentive by one supporter to score a goal with an overhead kick which he attempted & failed on at least two occasions. I am told the offer stands for the rest of the season due to the effort put in today. 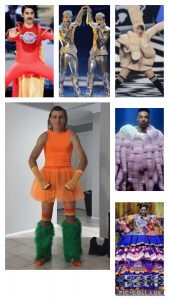