Match Report: Depleted numbers for the first time this season. Jake suspended, Ethan’s injury and Harry Burns away at an all weekender 1990’s throwback rave on the South Coast

The boys started well and created an early chance in the fifth minute when Liam put Harry Smith away one on one with the keeper – Harry calmly slotting home. We continued to play good possession based football and from a quickly taken corner from Martin to Damo, Damo’s cross was met well by Sam but his header went over the bar

Cranebrook played direct football on the break and got behind us once, good goalkeeping by Eli, getting off his line early coupled with scrambling cover defence by Sam, Aidy and Brayden cleared the danger

Finn, playing in the centre of midfield, fed Harry again later in the half but this time his shot was well saved

Just before half time we doubled the lead. A good passage of play set up Harry to shoot from the edge of the box. The shot was blocked but fell to Finn just outside the box and Finn struck it sweetly – the ball flying into the top left corner of the goal

We created another chance straight off the kick off but Ash was unlucky not to finish the move. Ten into the second half we conceded a free kick just outside the box and the cross from the free kick was knocked into the net to put Cranebrook back in the contest. Two minutes later the game was level, a well hit ball beating Eli

With 20 minutes to go the pressure was on to get back in front. We found the goal, with about 12 left – Liam hitting a loose ball in the box into the bottom corner

We sent Harry a text to let him know the result. Harry sent us a photo back, below, still raving on early on the Sunday morning 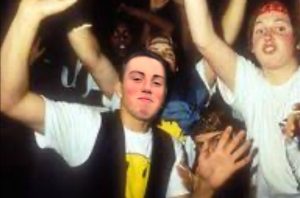