Player of the Match: Sam

Match Report: The rain held off for the boys grand final. We observed a minute’s silence prior to kick off to remember and honour club committee member Barry Summers who sadly passed the night before.

The first half was a tight affair, RSL having one header that went over. Our defence was pressured but the back four of Max, Millsy, Aidy and Sam handled it well. In front of them our midfield engine of Jake, Dom and Martin fought well too

In the second half there were a few more chances – RSL missing a couple of good ones and Ethan firing a shot that Jake almost tapped the rebound in. Jacob had a shot in the box and also went down under a challenge but a penalty was waived away

We pressed well the last 20, largely in RSL’s half but with 4 minutes left a break away resulted in a goal against us

Coach’s Player of the match was Sam for great defensive work and getting forward a number of times to assist the attack, getting a couple of good long range shots away too

The boys were devastated at the end to lose and right at the death too. The highs and lows of football in two weeks after winning in penalties in the semi!

– to Kate for being such a well organised, diligent manager
– to Lyn for fitness, strength & agility training every week
– to the parents for getting them to training & games & keeping up with my numerous texts
– finally to boys who are such a pleasure to coach 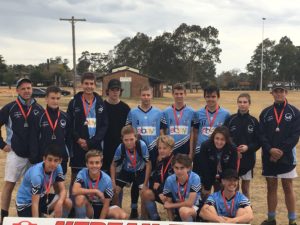