Match Report: Away to newly promoted Cranebrook with a full squad again. The opposition started strongly – winning the physical side of the game and on top for the first 10 minutes or so – one goal was scored but it could have been worse. The boys then stepped up and you could see the tide starting to turn our way. We equalised off a short corner that Jake sent a great cross to the far post for Ethan to head back across the keeper and into the net

Max was having a great half, handling another quick forward really well. Millsy, Aidy and Sam were also solid in the back line

A few minutes before the break, Ash got away down the left and his shot beat the keeper from just inside the box

At half time I let the boys know I felt we were lucky to be ahead and that we needed to improve in the second half. A couple of changes were made putting a bit more pace in the backline and fight in the midfield

We got an early goal, which really settled us, in the second half. A corner was hit long, which Ethan read well and hooked back across the box for Ash to knock in. Ash then set up Ethan to make it 4-1

A hand on the back in the box by Sam gave a penalty away, which Cranebrook scored

Jake and Martin had a great half in centre midfield. Alex Win joined Millsy in the backline and whilst Millsy was winning ball after ball in the air, Alex’s pace provided great cover behind.

Alex Crambrook was having an excellent half at left back, handling his opponent well and playing some great passes out to get us rolling forward. Late in the game Alex hit a great long early ball into the danger zone which Ethan reacted quickest to and poke home

Some super individual performances today. Millsy led the team with his actions in the back line; Ethan with some great finishes for a hat trick; Jake in centre of midfield. Parents player to Ash for scoring two and setting one up 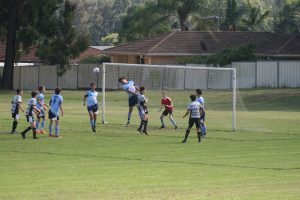