Player of the Match: Players player – shared Jake and Luke

A long road trip up the start of the M1 to Asquith for the next round of the cup. Everyone fit and available

The opening 10 minutes had us largely defending as Lane Cove West kept the ball well. We started to get a foot hold in the game and once we got into the opposition’s final third we looked dangerous. The opening goal came down the left after 17 minutes with Jake lashing home. A few minutes later Jake had another opportunity after a corner, this time off his right foot which he mis kicked but the ball spun and fell perfectly for Jake to knock home with the second attempt

A few positional adjustments made at half time to counter the extra player in midfield. The second half was more of the same as we defended superbly, starting from the front with Sam, Damo & later Ethan & Knobsy and when we had the ball in the opposition half continued to create the better chances. No further goals for either team

Lane Cove West’s keep ball centric football meant possession was probably 65% in their favour across the game. Our boys kept their focus and structure to limit the opposition to very few real chances. At the other end we created a lot and took our chances in the first half. Well played fellas, great game of football by both sides today

Players player shared between Jake, his two early goals really putting us in control and Luke who runs all day and never gets tired – today he was pretty close to being tired!

Photo – Jake puts away the first of his two goals 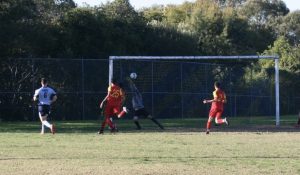