Player of the Match: Players – Eli; Coach and Parents – Millsy

Match Report: Straight knock out semi and our last game of the season at Knapsack

I expected a closely fought game and boy they didn’t disappoint. Chances were few and far between the entire game. Our defence was excellent, led by Aidy & Millsy in the middle, both winning countless aerial battles. Sam and swapping with Keastie at right back and Max man marking Colo’s dangerous forward all defended superbly

The midfield was a real arm wrestle but starting trio of Jake, Dom & the returning Martin (after 6 weeks away) scrapped and fought for every ball. Damo came into centre midfield as well and added some quality with his passing as well as contesting and winning ball

Out wide Jacob, James, Alex C & L were rotated on the wings and worked tirelessly to get forward but also get back and help out in midfield

Up front Ethan had a titanic tussle with Colo’s big, strong and talented centre half. It was a top drawer contest with neither giving an inch all game. Ethan had one effort brilliantly saved by Colo’s keeper

No goals in normal time, so 10 minutes each way of extra time. We’d been here once before this season in the cup and managed to find a win and this experience I believe would have helped. The boys were told to keep fighting and go for the win

There were a few chances in extra time. Ethan hit the bar, chipping the keeper, and the rebound didn’t quite fall for Alex C who would have had an easy tap in. Colo also had a shot that skimmed the bar

No score meant a penalty shoot out. Fortunately we have been practicing for a couple of weeks and I was certain on who the five were to take one – Aidy, Dom, Millsy, Ethan and Jake

The first 4 penalties were shared evenly (including Dom’s one stride and pass in the corner – learnt from Iceman’s penalty taking clinic last season!); Millsy put us 3-2 up and then Eli made a crucial save, diving to his left but getting a foot to the ball as it was hit down the middle. The next two were shared again leaving Jake the opportunity to win it – he did and the euphoria erupted as the boys, and coach (!) mobbed Eli for being the difference

Cruel way to lose and truly did feel for the Colo boys. Our boys were humble in victory on the field and then belted the team song out afterwards in the change rooms

An unbelievable afternoon of football. Thank you to everyone who came to watch – biggest crowd of the season and what a game to see

Players player was Eli – the penalty save so vital. Coach’s and Parents player Millsy who was a rock at the heart of defence, winning headers and some sensational tackles 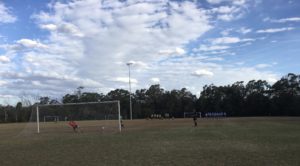