Match Report: Our second round of trial matches saw us up against another Blacktown Div 1 squad. Schofields Park was the venue – very different to last week as there were no change rooms, no goal posts, nowhere to warm up).

We set the gazebo up on the hill to keep the baking sun off us & as we set up a storm rolled through so the gazebo proved even more invaluable as everyone huddled underneath out of the rain.

An even opening 20 minutes or so with cousins Harry Burns & Matthias doing a great job in centre midfield, with new recruit Mitch in behind them screening the defence. We went 1-0 down on 25 minutes and copped two more just before half time.

A structural change was made at half time – dispensing the sweeper for a flat back three, the extra man put up front into a front three. We had not been able to get enough pressure on the opposition’s back four in the first half.

The second half and we looked better from the off having a lot more of the ball and playing higher up the pitch. Our early pressure paid dividends when Brad struck a loose ball from the edge of the box that the keeper couldn’t hold onto. Tails up we played the better football for the rest of the half and were unfortunate not to score more. Defence wise Captain Sam, with rotations of Mitch, Pom and Seamus were not overly troubled.

Harry Burns came off during the half with a cut just above the eye.

Player of the Match to Matt Bax who was excellent in defence.

Huge thanks to Pom, Archie & Brad of our 35’s for playing and helping out the young fellas.

A couple of late withdrawals of keeper Eli (James backing up in goal) and Jake. A number of boys backed up from the first game – Seamus, Harry B, Knobsy, Sam and Matt B – Matt B slotting into stopper from kick off. Harry Burns had been taped up around the head to stop the bleeding – Coach Cartman noting the resemblance to Terry Butcher in an England shirt after the 1989 World Cup qualifier against Sweden.

In a repeat of last week, the boys started brightly & dominated the opening 20 minutes or so but couldn’t find the back of the net (well, no net but hitting the chain fence then). Also as per last week we conceded a goal around 25 minutes in – from a long goal kick the ball falling between Brayden and James and the centre forward able to score. Undeterred the boys continued to play good possession based football and levelled not long before half time – Captain Aidy playing a terrific through ball for Ethan to score off his left foot.

Same change made at half time as the reserves – this time though as the coaches felt we were well on top even though the score line didn’t reflect.

The changes produced two goals in the next 10 minutes – firstly Ben shooting across the keeper with his deadly right foot and then Harry Hicks shot squirming under the keeper and in – great to see two new recruits getting their first goals for the club.

Riverstone pulled one back mid way through the half but we still were in control and as the game closed out our fitness showed and we created a lot of chances – two more goals scored – both by Player of the Match Aidy – a header off Harry Hicks’ corner and a smart finish from Beaso’s by line pull back. 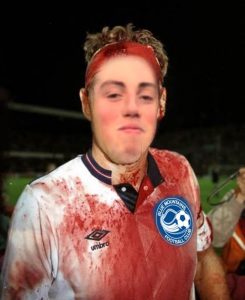 A brave Harry Burns, only a little bit of claret on the shirt