SandyPosted on 6 May 2019 Posted in Match Reports

Player of the Match: Chicken

Match Report: The late Saturday evening text every senior team Manager dreads came in from Gordon – no referee for your game tomorrow. After numerous texts and phone calls with Dre and Rod, from our opponents, we were sorted – a contra deal whereby Smithy would ref and we would supply three players for his team to ensure they had enough to play their game after ours

Sunday morning arrived and the next logistical nightmare of the away kit was handled smoothly. Our new signing grabbing the number 7 shirt vacated by the absence of Captain Marvel

The game was a real battle for 80 minutes with the final scoreline not reflective of this. We held the lead at half time after a penalty was awarded off of an unfortunate hand ball. Iceman grabbing the ball, striding up confidently to dispatch off a single stride into the corner. He’s back, baby

We conceded in the second half when Kev was unlucky to drop a shot, which was then tapped in. Kev made amends with a great save, pushing the ball into the bar to keep it at 1 all

With time running out, Marty made one final set of changes and these ultimately proved the difference. Archie fired in after great work by Chicken in the box. Chicken then won a ball in midfield to allow Mark Sem, now with lungs filled with air, to burst through unchallenged and slide the ball past the oncoming keeper. Archie hit a belter when given space just outside the box and Zap fired home at the far post after Mark made another great run down the left 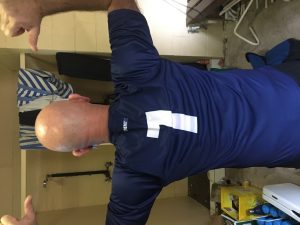