Match Report: The last game we had away to Lowlands had not been a good day. Ethan broke his leg. We also lost to the last kick of the game. We really wanted a top performance today

We aimed for a fast high tempo start and that’s exactly what the boys delivered. We pressed Lowlands back for the first ten minutes and created some half chances. Off a corner that went a little long, Martin controlled well and was then knocked off the ball. Penalty, dispatched by Liam

The second half started well with Liam sending Jake clear – his shot was parried by the keeper and Damo was well placed to knock the rebound home. Many more chances were then created but only one converted. Again it was Damo on hand to pick up the scraps after Ash’s cross to Harry Smith fell loose

A good team performance however one player shone today – in the first half, there was a period before we scored the second that we needed to dig in and scrap as Lowlands fought back. Damo made a number of awesome challenges and put himself about well. In the second half Damo demonstrated his natural ability to be in the right place at the right time, on two occasions. Easily bagging the majority of votes for Players player of the match

Photo – Damo with a ‘don’t argue’ to win the ball 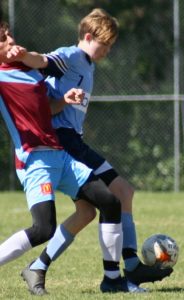