Match Report: It was a chilly early start with a bit of frost on the grass still in the shady parts of Knapsack main two as we put the nets up

Evenly matched for the first 15 minutes and then the first goal came courtesy of some good build up. Jacob received the ball in midfield and passed to Liam on the left edge of the 18 yard box and Liam’s angled cross was met in the air by Ethan and Jake hit the loose ball home

Jacob was having an excellent half. In the opposition box he bamboozled the defence with his tricks and step overs – I asked the boys on the bench if Jacob practices stepovers at school and was told yes he does, just walking around if he comes across any sort of object in front of him he will shimmy one way then the other & for smaller objects add a step over. Brilliant. Jacob also showed his defensive determination – on one memorable occasion sprinting back to midfield to nick the ball off an unsuspecting opponent from behind… loved the effort

The second goal came when Harry Burns had the ball at his feet on edge of the box and laid it off to Ash to hit a curling first time effort away from the keeper and into the corner of the net. Great finish

The third goal of the first half came from Finn who fired in from the right hand edge of the box. Another super strike

At half time we talked about keeping a clean sheet and going on with it in terms of a few more goals. We achieved one of the two

The fourth goal came from an Ash corner, that bobbled around a bit and and Jake fired the loose ball home

Sam won a penalty after a driving run into the box and the ball was handled. Sam declined the opportunity to take the penalty instead leaving it to Ethan. Sam you should have had a crack. Ethan’s strike saved

Lots of top performances – Luke down the right and in defence, Jake in midfield, defence & two goals, Damo at CDM in the first half was excellent & as mentioned Jacob’s skill & effort 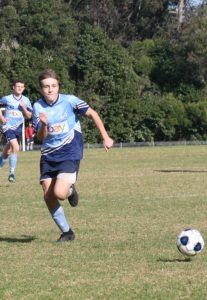