Match Report: Finn was given a run up front and produced two goals in the first fifteen minutes. The first came after two minutes when Harry Burns made a surging run forward from midfield, passing to Harry Smith, who played Finn in behind the last defender to knock neatly past the oncoming keeper

The second came after Jacob got to the left by-line and pulled the ball back, in the air, for Finn to control an awkward volley well into the top corner

Off a corner Brayden took a boot to the head and the boys appealed for the free kick – not given – and a Penrith player took full advantage of the momentary pause, lobbing Eli with a cross come shot

Just before half time, a hand ball was given in the box and Liam stepped up to take the penalty and calmly put it away for 3-1

We did get one more goal – Jacob getting away up front on the break, the ball came to Ash who belted it home with his left foot

Photo – Goalkeeper Eli rises like a salmon to catch the ball 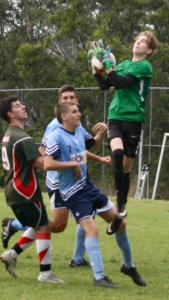