Coming into the game, we knew the equation was three wins from three and we couldn’t be caught for the title. A loss or even a draw would hand the advantage to Rovers. We were a few behind on goal difference so the plan, aided by Cranebrook having no subs, was to play high tempo in the heat, rotate our subs regularly

We got off to a flying start with three goals in the first ten minutes. Damo got the first, smashing a volley in with his left foot. Next, finally 🙂 , Harry Burns made a driving run into the box and hit his shot across the keeper and into the bottom corner. Eli gathered the ball from a Cranebrook corner and saw Jake up front one on one with the last defender. The long kick bounced up well and Jake got there first to head over the oncoming keeper. Ten minutes later a carbon copy – this time Eli’s long kick to Knobsy who controlled and poked home. As a ‘play out from the back coach’ you could say this goes against the principal but I also say ‘play what you see’ and Eli is an instinctive footballer who has always had a great read of the game

As half time approached, there were murmurings in the home support. Parents were looking at phones and fists being pumped – what is going on? Like the last day of a Premier League season, fans watching the game, were getting messages from another ground. Rovers had drawn their game – a win today would now win us the league

With the pressure now relieved, we made some changes at half time to try and get a few of the boys on the scoresheet for the year. Knobsy volunteered to go in goal and with the score only 5-0 this was a big risk that I ultimately gave into after asking every other member of the team if they could go in and no one wanted to. Eli was on the pitch!

A forward line of Brayden and Jake (given a final 10 minutes to bag his hat trick) and cousins Aidy and Harry in centre mid. Plenty of chances came and went – after one shank Brayden raised him arm begging to come off – no, keep plugging away mate!

Sam replaced Jake and also did everything but score. Finally two boys looking for their first of the season, Beaso and then Luke showed them how it’s done

Eli scored but after his celebration running down the line high fiving the fans he turned round to see it was ruled off side. Cruel.

At the other end, Knobsy surprised everyone – maintaining a clean sheet and at one point preventing a goal with a one on one save. Who knew?

Great performance, particularly first half to put the game to bed. Super fun playing people out of favoured position in the second half

Players player for Eli – a few saves, two goal assists and everything but score in the second half

Champions! Well done boys, fully deserved for all your hard work this season 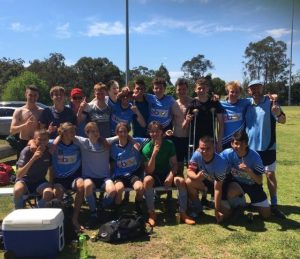