Player of the Match: Emily

Match Report: The BMFC Under 12 girls have taken all before them this season.

Finishing top of the table then qualifying for the GF in the Championship Tournament, the girls took out the title on Saturday in a close and tense encounter with Penrith FC.

The girls’ relentless pressure, composure with the ball and solid structure for the duration of the game saw the game open up late with the nil all deadlock broken with 3 mins to play, courtesy of a great finish by Tilly off a cross played in to the busy goal mouth.

All the girls were brilliant and it was certainly a trademark team performance for the ultimate game of the season, playing with confidence and an attacking flair, while ensuring Penrith didn’t have any easy possession when the ball was in dispute.

After receiving their Competition Winners and Championship Tournament winners medallions, Emily was awarded with the game ball for her outstanding performance during the GF, being solid in goals in the first half and then putting on a dazzling display on the ball in the second half.

As competition winners, the girls go on now to compete in the Champion of Champions, with the first game next Sunday.

At this point it is worthy to acknowledge the resounding success that this season has been for the 12G.1 team, in what is for most, the first season in an all-girls comp.

Special mention and thanks must go to Paul Swatridge for his dedication and absolutely outstanding job as coach all season.

The girls improvement all season under his guidance has been really impressive and they continued to get stronger and better throughout each game in the final rounds.

Also doing a stellar job as manager, special thanks to Ian Thorpe who has coordinated everything with impeccable efficiency. 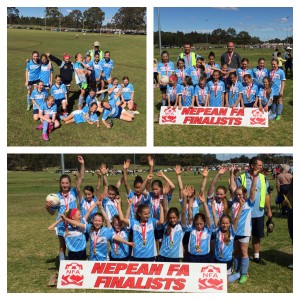