Player of the Match: Alex Win

Match Report: Finally the first league game of the season. We were up against Colo who we last played in a tense semi final at the end of last season. We expected a tough game and we got it

Both sides had chances in the first quarter and we went ahead after a quick break by Ash – his shot was well saved but Ethan followed up and scored with his second effort. Colo equalised and then we were awarded a penalty – the tussle between Ethan and Colo’s big strong centre back is always good to watch – Ethan getting the better on this occasion and up ended for a penalty. Unfortunately Aidy’s penalty was saved. Half time, 1-1

A few changes were made up front for the start of the second half and they paid immediate dividends with 3 goals in the first 5 minutes after the restart. Alex Crambrook got in behind on the left and squared for Damo, all alone in the box, and he passed it coolly into the corner. Next Ash whipped in a great corner and Aidy rose and met it with his head and the ball sailed into the top corner. Finally Ethan was fouled again in the box and this time Alex Win stepped up and put the penalty away

Either the boys switched off or Colo fought and managed to find a way back into the game for the next 15 minutes (it was a bit of both I think). Two goals were scored against us, one another penalty. The last 15 minutes were a tussle as Colo chased the game and we battled to keep them out and were dangerous when we went forward too. Harry had a shot flash past the post and then in the last minute a loose ball in the box was leathered home by Ethan to seal the points

An exciting game of football. The boys were brilliant in the first few minutes of the second half to all but win the game with 3 quick goals. They were also super to battle at the end to see it out when the game was back in the balance. The bit in the middle where we let Colo back in the game is the part we need to work on this week…

Some great efforts today – Max man marked the dangerous Colo winger well again. Parents player of the week was awarded to Alex Win – great to have Alex finally in our team 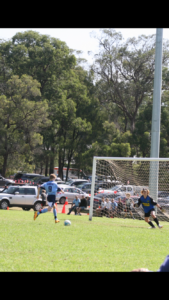