Player of the Match: Micky C

Match Report: It was beautiful sunny day at Jamison Park for the Championship Final against an in form Penrith side who won their last 6 matches.

After last year’s debacle, Sean cancelled the family holiday to make sure there was organisation and order on the day.

ID cards, in alphabetical order, subs, Marshal Matt W, balls, bibs, win the toss, all ticked; the formalities went ahead without drama. The first half left a lot to be desired from a Blueys perspective, as we struggled to get any control, Dave H blamed the over-inflation of the ball; apparently this caused the back three to continue to pass to the guys with green shirts for most of the first half; in fairness, there were not a lot of options in front of them, except for Paul who continued to make himself available.

On the one occasion we passed to a Blueys player – it was Rhett already carrying an injury who had a swing and a miss before recovering to clear the ball; unfortunately he suffered a new injury in the process. This resulted in Rhett and the opposition keeper both kicking with their non-preferred foot … not a pretty sight for the football purists.

Finally we put three passes together – Joe C passed to Mick C who had a shot on goal. From the ensuing corner by JB, Sean had a great opportunity to get off the nudie run; not enough contact was made the ball went out for a throw.

There were calls for subs for the Blueys after Penrith made their 16th rotation; finally Dunny was subbed, although not in his opinion the worst on ground and Andy Football was introduced and given 2 minutes to make an impact. No impact half time.

Half-time brought the Pommy and Joe show as they discussed the virtues of the poor condition of the pitch which both teams were playing on. Joe also made the comment to Brad that he seemed off his game and looking every bit of his 40 years and 1 day, his state was not helped by receiving a Falcon in the warm up, Sean was subbed at halftime and replaced by Mick from the Village who had spent the week recovering for what Chicken said was a season ending injury.

At the start of the second half Danny, Dave and Pommy gave the secret hand shake, happy being nil all after playing up hill against the wind and rubbish.

The second half saw the breakthrough the Blueys needed. Brad took the half-time team talk well, he scored and settled the team down and the flood gates opened, Mick from the Village got a brace with some on the sideline suggesting Joey should not have passed for that close, very unselfish. Corey came on pushing to have his guest contract updated to full time contrart for next season and applied himself well. Soon after, the Pirate was introduced after saying to Dunny “I bet you $20 I’ll score if I get on”; ten minutes later he had a goal and $20 of Marty Dunn’s money. After that the remainder was a festival of football by the Blueys with only a couple of scary moments … after all a 4 nil lead is dangerous lead.

It was good natured match played in the right spirit and thank you to Penrith for being our opponents.

As this is the end of the season, it is appropriate to thank the people who have supported us the during the year: 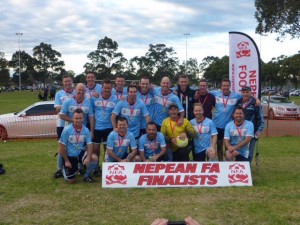