AdminPosted on 18 May 2022 Posted in Match Reports

Player of the Match: Knobsy

Our Waratah League squad have had a mixed start to their first season. Both teams have been competitive in each of their games – the reserves picking up results with three wins to date and the first team not getting the results yet, though the performances have been good.

The boys got off to a flying start with Ethan getting in behind the defence for a 1 on 1 with the keeper but put his shot wide. A few minutes later Ethan opened the scoring and then double the lead after Liam put him in again. The boys showed great game management over the next 20 minutes to slow the game down and keep the ball away from the opposition. Before half time Ben and Liam notched to give us a very comfortable half time lead

We did this well and added some goals toward the end of the game too – Ethan up-ended and Captain Aidy converting the penalty well. Back up keeper Jimmy came on for Ethan at centre forward for the last 15 and was involved for Damo to belt home a screamer and then stood up the right back and got a great cross in for Damo to double his tally

Players Player of the Match to Knobsy who played at centre back with Aidy and defended and distributed well all game. Jimmy a close second for his impact late on 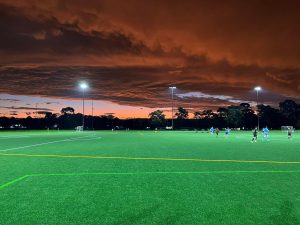