Match Report: A late afternoon kick off for the visit of Penrith FC to Knapsack. Millsy was given a run in the centre of midfield alongside Martin and the pair were fantastic in setting the foundation early to allow us to get forward. In the first ten minutes Ash created a few opportunities down the left, unfortunately Ethan couldn’t quite put them away – coming closest with one shot hitting the underside of the bar (VAR would have been useful as the home supporters are sure it went over the line!)

We were then caught on the break as the Penrith centre forward got in between our centre back pairing of Aidy and Alex W and fired past Eli. A quick response was delivered though with Ash levelling following a shot from Ethan that was saved

Late in the half Aidy was adjudged to have committed a foul in the box, even though it was clearly that it was Aidy on the end of the foul. Fortunately the penalty was blasted well over the bar

In the second half, Sam made a lung bursting run from right back all the way down the wing and got a great cross into the box

As the half wore on it seemed we may have to settle for a point. With time running out Damo had a great shot saved that seemed destined for the bottom corner. Finally we found the winner with a scrappy finish by Ash as the keeper was out of position. In the last minute we won a penalty which Alex W took but it was well saved 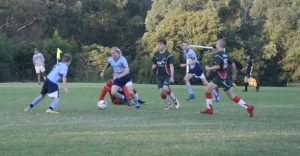