AdminPosted on 21 May 2019 Posted in Match Reports

Player of the Match: Played superb on the wing – Chicken

Ah the romance of the Cup! We set off bright and early for our home game, at Auburn, against Greystanes. Far too early as it turned out with the game before us running late and then going to Golden Goal to decide the contest (Paul, you owe half the team $5 each as the yellow team won)

Cobra negotiated the extra admin involved with a State Cup game well. It was the first time the player cards had been utilised and oh dear, some of the player photos more resemble a police line up than fighting fit footballers – see below

Pre-match warm up saw The Dentist nut meg Prince Archie at least 3 times – ‘come on, come on ‘ave it’ was Archie’s cry as he steamed in to make the tackle followed by ‘cor blimey guvnor’ as The Dentist did him like a kipper once again

We noticed Greystanes had a much larger, well chiseled version of our own Thor and all hoped we didn’t have to mark him

Finally game time arrived and with the players all hanging around the centre circle the referee and two linesmen in shiny new bright red shirts strided out from the club house, past all the players and across to the far side line. About turn, shoulder width apart, then strided back across to the centre spot. Very official officials

The game itself we largely controlled. Greystanes were reduced to long range efforts in the first half, Double Fist untroubled. Captain Marvel split the defence with a ball through to Chicken who plucked the ball away from the on coming keeper and into the net. Before half time Mark Sem beat one of Greystanes ‘SC’s’ and passed onto Chicken running through on goal – poultry in motion – two nil

In the second half, Chicken rose high to a cross to peck home his hat trick. Zap joined in, nodding in a fourth from a super Brad cross. Greystanes pulled one back but we’d done more than enough and through to the next round and hopefully a lucrative home fixture for the club to swell its canteen coffers 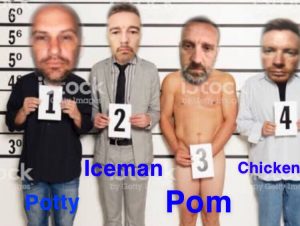