Match Report: A downpour Friday night had meant all but a few games were postponed – fortunately, the drainage on Knapsack Main 2 was in sparkling form leaving it very much playable for another big game with Rovers

A few concerns in the hour before the game – Evan taking a tumble off the ladder putting the nets up & with five minutes to go before the game, just one young Assistant Referee staring hard toward the car park & hitting re-dial again on his phone. Where was the referee and the other assistant? No show (we found out after the game they thought it had been called off – pfft, it was never in doubt!) We needed a ref. Andy went looking in our socially distanced yet heaving home support & JB stepped up

We were finally underway. We set up to cover the pace we now knew Rovers had coming from out wide. We got on top & controlled a lot of the possession early and created a few half chances. From a corner swung in by Ash, the ball was half cleared to Aidy at the edge of the 18 yard box. Aidy played a super ball cutting out the defender to Finn out on the right & he put a cross back into the box and at the far post Ash appeared getting just enough on the ball, the keeper getting to it but only after it had crossed the line

Off a Rovers throw in back to the centre half, Ethan went very close to doubling the lead – stealing the ball and shooting just wide of the goal as the keeper advanced. We then won a free kick just outside the 18 yard box and Liam having scored a few weeks earlier stepped confidently up but his strike went just over the bar

Our defence was solid. Jake’s aerial strength and ability to break up play along with Knobsy & Luke at stoppers nullifying Rovers most dangerous players. On the odd occasion someone did get beyond them, Brayden was there to sweep up & the ever reliable safe pair of hands from Eli were rarely troubled

Half time came and it was an easy team talk to deliver – keep going, keep playing the way we were, we could have been further ahead and more goals will come. We have also talked at training about putting two good half’s together – something we have only done once this season – a poor half and 1-0 will easily be turned around

Rovers pinned us back early in the second half but the defence did well – Sam had been introduced & was a wall as ever. Martin and Jake shielded & broke play up time and again in the important CDM role. Just as I was about to make a couple of changes, the boys broke away – the two Harry’s combining. Harry Burns broke through the midfield and passed to Harry Smith. Harry feigned to shoot with his right just inside the box and then cut hard onto his weaker left foot and belted the ball across the keeper into the far corner. An excellent piece of finishing

A third goal came our way. Aidan fed cousin Harry who dribbled inside the oppositions half with Ash to his left and Ethan on his right. A timely pass and Ash’s pace saw him through one on one with the keeper. Smartly Ash squared the ball to Ethan who had been careful to stay onside and knock the ball into the empty net. Well deserved goal for our centre forward who works so hard for the team

More chances came – Harry and Ash combined again in the box but Ash hesitated and the keeper had the advantage to get the ball. Finn got away down the right & fired a bullet cross in for Ethan that was well saved. Jacob produced a brilliant bit of ‘now you see him now you don’t’ in the box and again combined with Ethan for another opportunity

A late Rovers chance hit the bar and scrambling defence by Luke cleared the ball. Typified the teams resolve to the end

Best performance of the year. Every player played their part. Very hard to pick coach’s, parents and players player and a different one for each. Clean sheet says it all about the defence. Midfield dominated – Harry Burns both Coach’s stand out. Up front, combinations were changed during the game but the goal threat was there all match

Players player went to Harry Smith for a huge impact when he went on for Ash, who also had a superb game. Terrific goal from Harry and caused trouble on both left and right wings, well done mate!

Photo: Luke, eyes firmly focused on the the ball 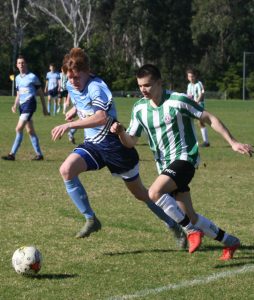