Match Report: First game this season between two teams that have been very evenly matched every year starting at the under 14’s – each game is a huge battle and we expected exactly the same again today.

The boys arrived ahead of Coach Mark – Knobsy kindly pointing out I was 6 minutes late…and where was Coach Andy? There he is…with my coffee. Good man

A big crowd was present – well, appropriate 1 per player by the pitch plus many more staying in their cars & still getting a good view of the game courtesy of Parker Street’s ideal car park to pitch position

Andy joined me in the technical area in his Managers jacket and the game was underway. The opening 15 minutes were a battle for supremacy with no clear chances I can recall

Around the 20 minute mark, the opening goal came. Ethan challenged the keeper in the air by the penalty spot and cleanly won the header. The ball fell to Ash to volley home into an empty net

A few minutes later and we went 2 up.

At half time the focus of the chat was on game management. 2-0 is, as we all know, a dangerous lead

After being the more dominant side in the first half, the second was more even. No goals were scored until mid way through the half – Rovers pulling one back from the edge of the box, a shot curling beyond the outstretched Eli for once

Rovers started to push us back and had a number of corners and free kicks around the box. Our boys held firm time and again clearing the ball away.

Some sort of brew ha ha seemed to break out near the half way line on the spectators side. Who would be in the centre of this hubbub? Andy claimed his innocence post match – we all believed him 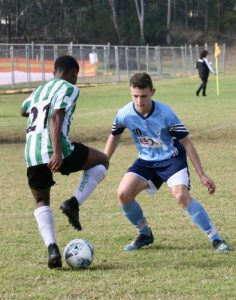