Match Report: It was back to Knapsack for the penultimate game of the season proper. To avoid a clash of colours we donned the purple away strip, much to the delight of the boys, especially “The Cassowary” who was thrilled to morph into a purple people eater!

With Will Cooke and Gus away on holidays we needed to do some shuffling of positions for another clash with Henry Lawson. Jacob Hunter was given the captaincy and responded well to this added responsibility. He defended Henry Lawson’s best forward with skill and composure.

Through patient passing and possession football we were able to build some pressure resulting in a good finish to Billy for the first of a hat trick of fine goals. His third hat trick of the season. He was challenged to step up in Gus’ absence and step up he did! Lachlan Bowe put away a fine goal to give us a 2-0 lead at half time.

Our passing game clicked up another gear in the second half and the boys were rewarded with another 5 goals. Two more goals to Billy, one to Aidan, the first of the year for Sean (now I can get some sleep!) and one for Robbie who was given a run out on the field late in the game. “Captain Jacob” was desperately unlucky not to grab a goal.

Lachlan “Stewie” Jones grabs Man of the Match playing his best game of the season so far. During his ‘match commentary’ on the way home in the car he claimed he set up all seven goals even though he was off the field for one of them! (He didn’t really say that but you wouldn’t put it past him!) He did have the ball on the string from his corners and it is fair to say he was heavily involved in 6 of the 7 goals.

Will Foreman and Chris were again rock solid in the midfield and Zach “Scoooooobes” Scoble played a fine game in defence.

A big effort at training on Tuesday and Thursday is necessary to fully prepare for the fight for second place clash with Hazo next Saturday morning. 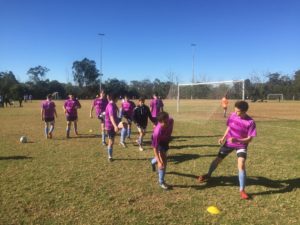