Player of the Match: Chris Cather

Match Report: We headed up to St John’s Oval for the local derby, full of anticipation and ready to take on the competition leaders.

Through skilful defence, good positional play and fine possession football we held strong in defence and had the better of the play in the first fiften minutes of the match. No major opportunities were created but we were looking good in the early stages.

Around twenty minutes into the game Blaxland pressed the ball forward and were rewarded will a goal from a fine strike indeed. An unstoppable shot which deserved a goal. Another two goals to Blaxland in very quick succession put Blaxland in control of the match.

The boys didn’t give up and came out strongly at the start of the second half, doing everything they could to put some pressure on the Redbacks. We were unable to break their solid defence and in the end they scored a further three goals in the final quarter to give them a clear 6-0 victory.

Chris Cathers was far and away our best and earns Man of the Match honours. He was determined in the midfield and at no point stopped contesting for the ball. Heath, Will F and Gus also played well.

It wasn’t our finest overall effort but we can learn a lot from the match about what is needed to beat the competition front runners.

One highlight of the match for us was the was the high standard of refereeing. Athletic, skilful, astute, decisive and fair, and all based on excellent positioning and whistle work. “Superb!” was the call from the Blueys faithful!

The second highlight of the day was the go-karting after the match. Congratulations to Darren who took the honours in the adults group and Aidan Monaco who was the best of the boys. Many thanks to Darren Kingsford for doing an outstanding job of getting us organised for a an afternoon of fun and friendship and to take our minds off the early afternoon!

“Muppet” Jones wants the next activity to be paint ball but the coach is not so keen on becoming a pin cushion for the boys to take out their frustration on!! Let’s do a jigsaw instead lads! 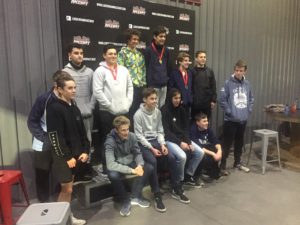