AdminPosted on 28 May 2018 Posted in Match Reports

Player of the Match: Damo

Match Report: A proper, late Saturday afternoon football match up at a beautiful Pitt Park. The force was with Wentworth Falls, literally, as Jedi Warriors were seen just to the side of the pitch prior to our game, swinging their lightsabers – see photo inset

The first half was not pretty – we just didn’t play with the intensity seen in the last couple of weeks. We did have a few chances – Martin and Alex C struck well from distance but Wentworth created well too & some scrambling defence and a solid Eli kept the game scoreless at half time. Keastie came off early, still suffering after a pre-Friday training session decapitation

Neither coach or the boys were happy with the first half. A lift in energy and desire to take a grip on the game was asked for and promised. Also, get closer to Ethan up front as he was being left up against two or three defenders with little support too often

The second half was a different game. The boys played with intensity, at a high tempo and encamped in the oppositions half. Jake played further up with Ethan and was instrumental in creating two opportunities that Ethan converted. Dom had a super effort saved brilliantly that looked destined for the top corner. Damo produced a dazzling bit of individual skill to open the defence up for Ethan’s hat trick and then again for Alex L who’s shot was well saved. James had a huge impact too, getting involved in many attacks with Ethan and Jake particularly

A game of two half’s. Solid defence from Aidy, Millsy, Sam Max all game. Midfield trio of Dom, Martin & Jake really got hold of the game in the second half. Excellent finishing and fight for every ball again from Ethan

Player of the week Damo who was at his creative best, particularly in the second half opening up the opposition with some great passing 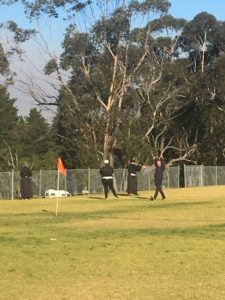