Player of the Match: Caleb, with a little help from an Angel protecting the goal.

Match Report: An emotional week for all involved with the club that knew Connor. School holidays had impacted our already small squad significantly with Jake, Millsy, James and Oli all away. They can’t have school holidays out Bligh Park way as they had a full compliment. We knew we were in for a tough game against a very capable side.

To ensure we could field a full team Caleb, Max and Lachlan were borrowed from the 12.1’s. Thank you boys and parents so much (as I know your game was later in the day).

Caleb went in goal and Keastie was a very proud Captain for the day, leading the boys out to the middle. Ash & Finn joined them for the jog out and the following minute’s silence. This was important as these two boys have been a big part of the Club and this group of players for many years. Ashton started at Blueys with Connor in the under 5’s and played every year in the same team. Finn joined and started playing with Con around the under 8’s and played with him every year since. The three of them are very close best friends.

The instructions pre-game from the Coach were more emotive this week than technical. Work hard, fight for every ball, don’t drop your heads if we concede and enjoy the game. Con was all heart on the pitch and that is the way he played the game.

We started well, keeping the ball, passing and moving. Damo and Eli held the centre of midfield together superbly. When we did get a chance to break Liam and later Lachlan worked their socks off to give the defence no time to settle on the ball. Alex was superb out wide on the left as an outlet for the defence. At the back Hamish, Sam, Dom and Keastie were hard in their challenges. Max played a few roles including centre back, centre mid and right wing – in every position he excelled.

We held firm to half time and went in locked at 0-0.

The half time talk included teaching the boys how to wind the clock down. We waited in the shade until the ref blew his whistle to start the second half, letting the Park boys stand in the baking sun. Take your time with throw in’s and goal kicks. Hey, it’s all part of the game!

The second half and Bligh Park continued their onslaught. Caleb was magnificent all game, making numerous saves, punches and catches. It was also evident today that the team had a 12th man sitting on the crossbar looking over them keeping the ball out as honestly there must have been 6 shots hit the bar or post and countless more that looked certain to go in but somehow did not.

Dom went down injured and the Coach thought to himself ‘is he winding the clock down?’ Dom came off, after 3-4 minutes, clearly injured but bravely went back out to help the team later on.

Eventually we fell behind off a scrambled goal from a corner. The boys didn’t drop their heads, they dug in even deeper as they were getting more tired and suffering injuries, such as Dom’s sore ankle.

Eli was moved up front late in the game to offer more pace for the instrumental Aidan to use his range of passing to try and pick a good through ball out. Eli ran his heart out trying to worry the defence into an error he could convert into a chance.

The final whistle came and the post match debrief from the Coach was the hardest one I have ever had to deliver. Today every player gave their all, working tirelessly for each other. As a defensive, team performance, it will go down as possibly our best. This inspiring team effort was done in front of a much larger group of supporters than usual, including a number of boys who were also Con’s friends and that he has played with over the years – Harry, Ben, Gus, Will and of course Ash and Finn. Thanks for being there boys.

Player of the week went to stand in keeper Caleb. Caleb was outstanding in goal all game. Connor loved playing in goal too and I don’t think Caleb would mind me saying he had a little help from an Angel protecting his goal today. 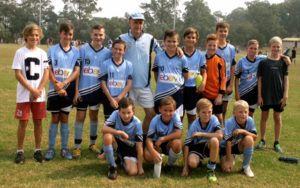