AdminPosted on 15 May 2019 Posted in Match Reports

Player of the Match: JB

Match Report: Today we played Glenmore Park, who used to be Penrith FC until this year when the entire squad changed clubs

Talking of used to be, our cross dressing defender Pom, excitedly talked about Eurovision before the game, letting us all know to tune in next Saturday night. The Bearded Lady, as we all fondly refer to him, reminisced about his / her time in the spotlight at Eurovision 2016 (photo inset)

With only 16 able to go on the team sheet and mid week seemingly 18 available for selection, no one had answered any calls or texts received from the Gaffer. The majority chose to arrive early to ensure their spot. JB was a little later into the change rooms and Dave let JB know his place may be in doubt – it was pointed out that the rule does not apply to footballers

Highlights of the game were:

– We were called off side, a lot
– We created plenty and finished off some
– ‘Prince’ Archie notching a hat trick 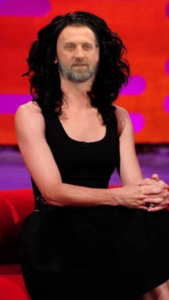