AdminPosted on 27 May 2019 Posted in Match Reports

Player of the Match: Harry

Match Report: A defensive structure that we have implemented over the last few weeks has so far paid dividends

In attack, in the first half, we created numerous opportunities but just couldn’t find the net. Harry was very creative in the attacking modified role and had a hand in a lot of the good work. The only only goal came off an Ash corner, drilled in, which Millsy, up from the back got to and fired in. Glenmore Park troubled us at times through the middle but the defensive midfield team of Max, Jake and Martin worked well together to limit the opposition to long range shots

Half time focus was to vary the attack – shorten up the passes and play through and not always over the opposition. This insight was provided by our goalkeeper Eli – again demonstrating his great read of the game

In the second half we were put under pressure for the first 10 or so minutes but held firm. Martin then struck a glorious 20 yarder as the ball was cleared from an attack and this goal proved the one to open the floodgates. The last 20 minutes we created a lot of chances and this time the goals came courtesy of Ethan (3), Damo, Alex Win and his first goal in the league for his new club and team to Harry

Both Alex Win and Harry were excellent in the attacking midfield role today. Harry gets the nod for player of the week from his team mates and coach – well played Harry 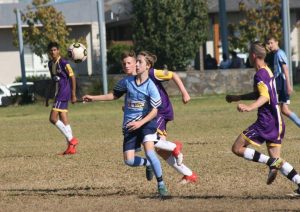