Player of the Match: Eli

Match Report: Team photo today and the boys had all got up early to do their hair and make up. Beanies worn, as is team tradition, to remember Con

To the game. We’d had a really competitive night game a couple of weeks ago with Springwood and fully expected the same today. Chances started to come after ten minutes or so – Ethan put away for a 1on1 by Martin; Damo pouncing on a loose ball in the box; a Damo cross for Finn to head and a shot saved from Harry from the edge of the box. Off a Damo corner after 30 minutes, Liam’s header hit the crossbar then keeper for another corner. Damo’s deep corner was met in the air by Ethan to give us the lead

Springwood started the second half really well and created two good chances. Eli saved the first bravely 1on1 and then a long range shot equally well saved. Aidy hit the crossbar with a deflected shot and then off a corner the ball was deflected in for an own goal. A few minutes later Jake found some space down the left and his it was saved but followed up by in form striker Martin for his third in two games

Eli voted players player and coach’s player – two brilliant saves at a crucial time in the game the highlights. Distribution excellent as always and also headed clearances just outside the box 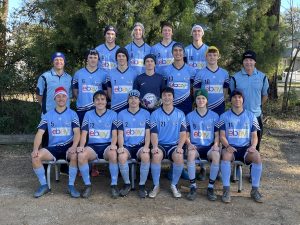